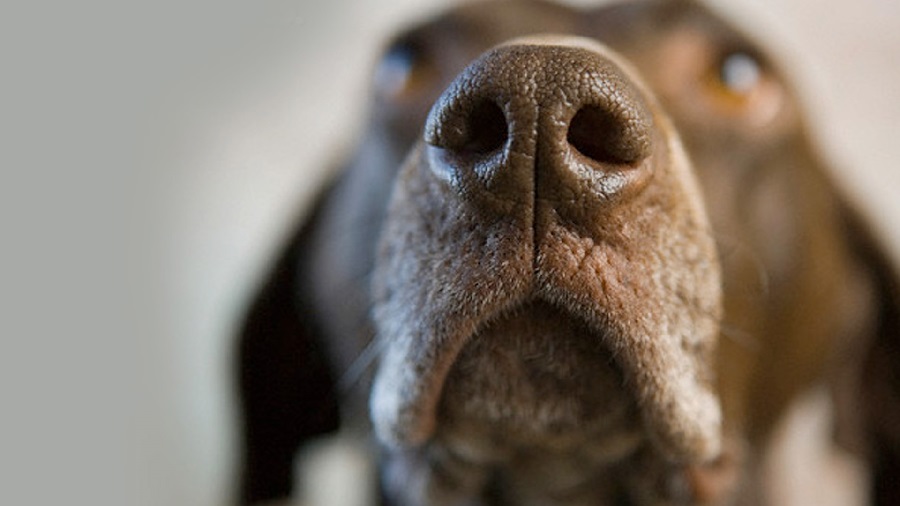 The Dog’s Nose – A Closer Look!

A dog’s nose contains over 300 million receptors compared to 6 million in humans. Evolution has equipped dogs with a perfect sense of smell. Your dog’s nose is over fifty times better than yours!

Your dog relies a lot on its nose and it must be taken well care of.

We humans see the world around us, dogs sniff it!

Dog noses are unique! The bumps and shapes on the surface of a dog’s nose are unique to that dog and no two dog noses are alike. We have a fingerprint, dogs have a “noseprint“.

Caring for Your Dog’s Nose:

Your dog’s nose requires very low maintenance usually. However you must always keep an eye open for any symptoms that may hint underlying issues.

Some people say that if a dog’s nose is dry the dog is sick / has fever. This is not totally true because although certain conditions can cause the nose to dry, a dog’s nose can be dry even if the dog is perfectly healthy. It is however very important to watch out for extreme dryness, flakiness and other things like scabs and sores that may indicate problems.

Dogs can have a runny nose. Dogs can catch a cold like us humans so a runny nose may be an indicator to visit the vet. A runny nose can also be caused by allergies (some seasonal) as well as objects that may get stuck inside the nostrils. If in doubt go to the vet!

Your dog’s nose can sunburn like yours, especially if you have a light coloured dog! You can find sunscreen for dogs that you can apply before going out. A better, easier, and practical way to avoid sunburn is to avoid the sun. Most probably if the sun is too hot to burn your dog’s nose it is too hot to go out in the first place.

Sneezing is generally not something of great concern. Dogs sneeze like we do. Every time we sneeze we do not  rush to the doctor, same with the dogs. However excessive and / or very frequent sneezing may hint an underlying problem. If all of a sudden your dog started sneezing more than normal, go to the vet immediately. Sometimes dogs can suck up foreign objects when they sniff things.

Get in touch!! We are here to help with any questions you may have.